This is a long-overdue behind the scenes post, our last before the Outlander starts airing episodes again.

Here’s a wee bit of #OutlanderSeries insight: It takes 2 hours and 30 minutes to create Jamie’s back scars, using two large prosthetic pieces and a few smaller ones. #STARZ #BehindTheScenes #BTS A photo posted by Outlander (@outlander_starz) on Feb 23, 2015 at 10:51am PST

Gather around and behold the first look #BehindTheScenes of #OutlanderSeries episode 109. #STARZ #BTS A photo posted by Outlander (@outlander_starz) on Mar 2, 2015 at 11:12am PST

A look back at the making of the original #Outlander art. Follow @Outlander_Starz on Twitter for the complete photo. #TBT #STARZ #BehindTheScenes #BTS

Where will Claire’s journey lead when #Outlander returns on April 4th? #STARZ #BehindTheScenes #BTS A photo posted by Outlander (@outlander_starz) on Mar 6, 2015 at 2:35pm PST

The red coats are back. #OutlanderSeries #STARZ #BehindTheScenes #BTS

The stunning Lotte Verbeek has us cast under her spell. #Outlander #STARZ #BehindTheScenes #BTS A photo posted by Outlander (@outlander_starz) on Mar 20, 2015 at 10:03am PDT

Less than two weeks from the #Outlander mid-season premiere. Here’s another look #BehindTheScenes of an upcoming episode. #STARZ #BTS

These three have a lot in store for us when #Outlander returns on April 4th. #BTS #BehindTheScenes #STARZ @samheughan @caitrionabalfe @lotteverbeek A photo posted by Outlander (@outlander_starz) on Mar 27, 2015 at 8:06am PDT

The Highlanders are ready. Are you? #OutlanderReturns in 2 days! #Outlander

Along with the image used on the Instagram account, Outlander on Starz’s Twitter account also tweeted this photo of how the first poster/key art was made. The second set of posters/key art were shot in the same spot. 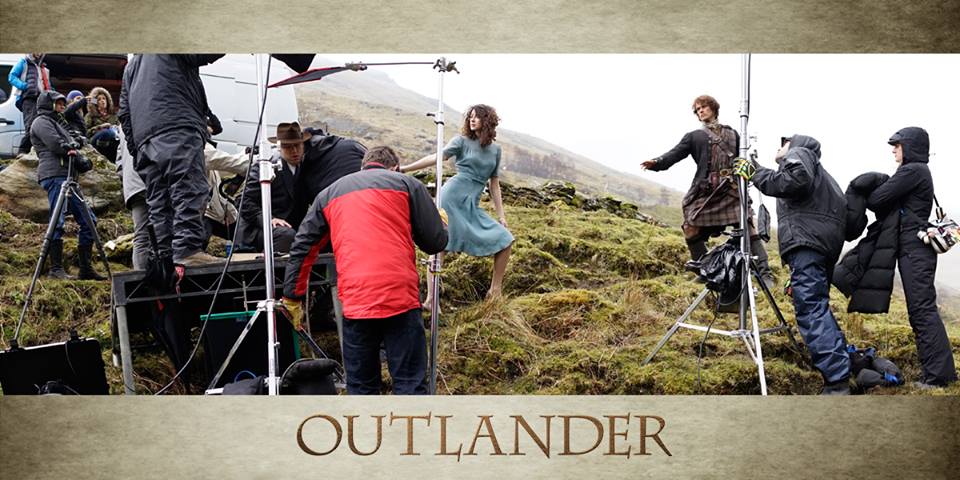 MoviStar (Spain’s Outlander channel) shared some BTS photos.  Some have been seen through Starz’s Instagram account, but Instagram limits how much of a photo you can see.  These are more expanded photos.

Amazon Prime UK was kind enough to share a couple of BTS photos from Episode 109, “The Reckoning.” 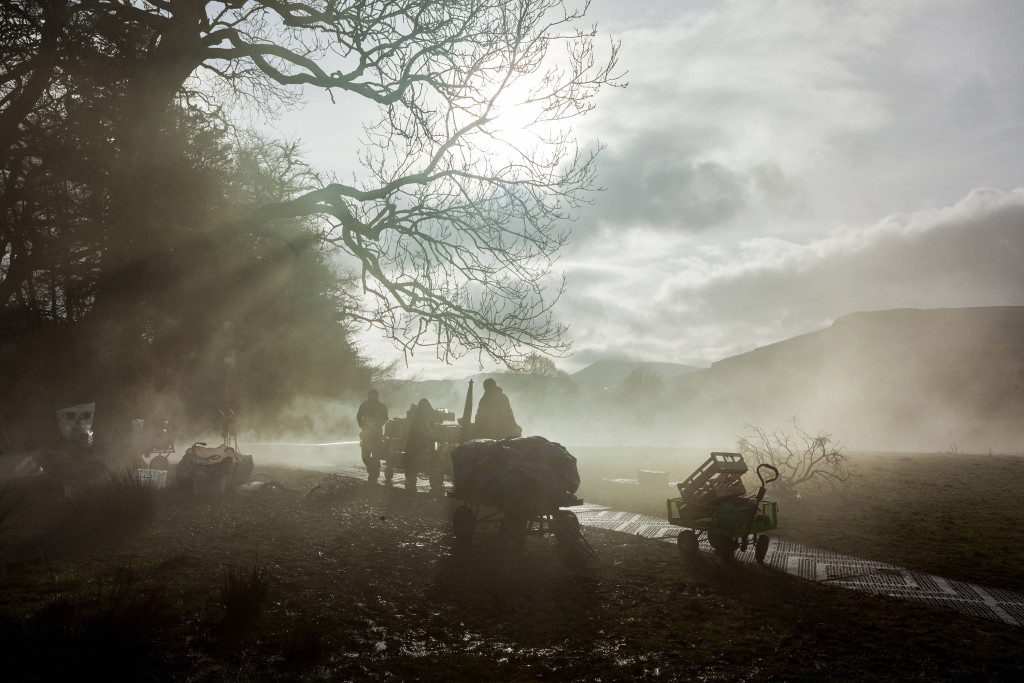 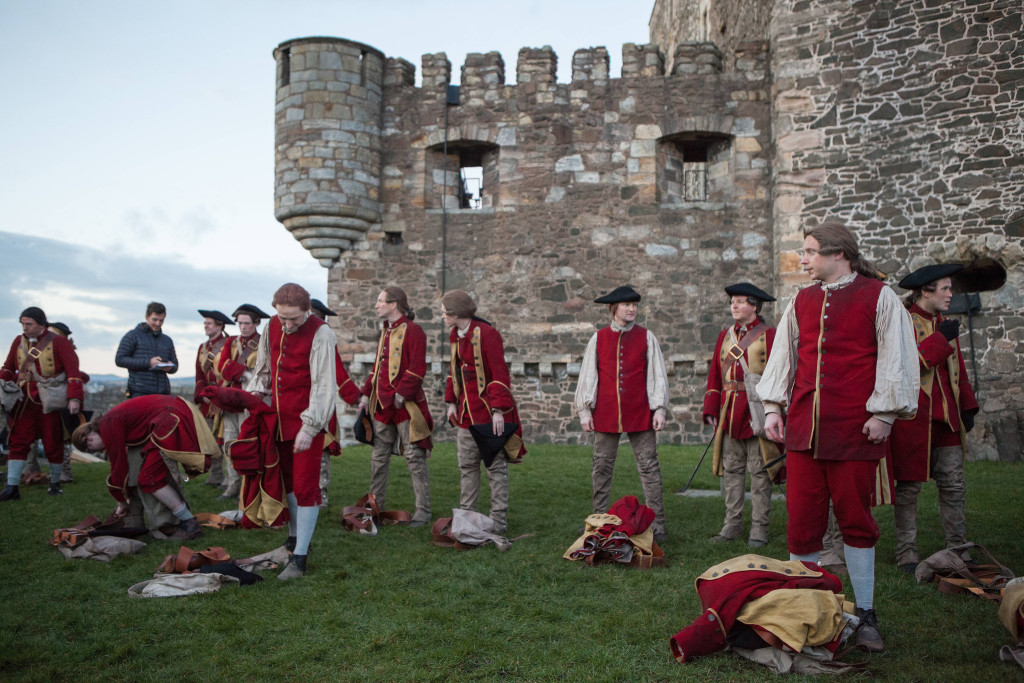 Onto the Twitter portion of the BTS post (which will probably not be in chronological order, this is what happens when you wait too long to do one!):

So good to see the whole #outlanderFamily especially Team @OutlanderWriter

@Writer_DG “And Young Willie, the most handsome, witty and charming of all the Highlanders, saved the day once again.” is that the passage? — Finn den Hertog (@FinndH) March 12, 2015

They’re raving about Poldark, wait til they see @SamHeughan and @caitrionambalfe in ” Outlander”!!

Lots of fans telling me to Cast an Actor but they dont know the roles I have to cast #whatrole #readthebook — Suzanne Smith (@SuzanneSmithCDG) March 9, 2015

@FinndH Two men enjoying each others company, with quiet dignity. Majestic in the wild. pic.twitter.com/3J7Iu2D7YX

For you, Outlanders. It’s Rupert on a skateboard and he has a lazer and a firesword and everyone thinks he’s cool. pic.twitter.com/IYnaGgCLeJ — Grant O’Rourke (@GrantORourke) March 13, 2015

Amazing #Outlander week. The awesome Ep116 final mix that began in mid-2011 with Ron and Maril asking “Have you ever read Outlander?” (1/3)

I must be working–the books are starting to move around… pic.twitter.com/NrlBAni4M7 — Diana Gabaldon (@Writer_DG) February 21, 2015

Getting ready to take my seventh and eighth flight in two weeks. #itsworthit @Outlander_Starz #OutlanderTravelthonContinues!

One plane down, one more to go today. #jetlag #OutlanderTravelthon @Outlander_Starz

Day five of travel-palooza with @RonDMoore. We will not be in the same place for more than three days for the next 2 weeks. @Outlander_Starz

.@effie10 @BuchholzDeanna ALL of our writers are amazing. And they all contribute to every episode. So there’s a little part of them in each

.@effie10 they usually all have favorites so it’s not hard to assign. Sometimes more than one writer wants the same Ep, like Ep. 7 -S1 — Maril Davis (@TallShipProds) March 15, 2015

.@Exit10girl every writer covers one “block” in which we film 2 eps. Typically, a writer covers a block that includes an episode they wrote

@marinemom2078 I sit in on the writers room. For the most part, everyone contributes (in some way) to all the scripts.

For those asking me to confirm casting rumors, don’t believe what u hear on the Web. Unless u hear from official source it’s prob not true — Maril Davis (@TallShipProds) March 6, 2015

.@effie10 Cant talk spoilers, but u can’t shy away from uncomfortable parts of the book. If u whitewash history, how will we learn from it?

.@Sev_Peyrichou @Outlander_Starz yes, pretty much. A chance for us to screen the episode and give last minute sound/vfx/color notes — Maril Davis (@TallShipProds) March 2, 2015

At the last #Outlander playback of S1 So proud of this season. Can’t wait for everyone to see it. @Outlander_Starz #ep116

.@ritagwood @sueconnollyjack I feel confident too. We have an amazing group of writers!!!! — Maril Davis (@TallShipProds) March 5, 2015

@maquis15 @sueconnollyjack not necessarily. Dragonfly is the shortest book I think!

.@Sev_Peyrichou @Outlander_Starz yes, pretty much. A chance for us to screen the episode and give last minute sound/vfx/color notes

At the last #Outlander playback of S1 So proud of this season. Can’t wait for everyone to see it. @Outlander_Starz#ep116 — Maril Davis (@TallShipProds) March 2, 2015

@craiclander we write up character descriptions and give them to our casting director. She rounds up potential actors & puts them on tape

@craiclander sometimes we ask her to bring in a particular person if we’ve thought of them for the role.

@craiclander and from there we pick the person we like for the role! 🙂

#BTS After nearly a year of filming season1. Tired but dry. Less than a week to go @Outlander_Starz pic.twitter.com/ShHcKp9Hdy

Blast from the past from the 1st week of filming @Outlander_Starz I believe there are only 7days until Ep109 4/4 pic.twitter.com/G6CF1KburQ

.@Writer_DG @Outlander_Starz now I’m waiting for “The Adventures of Iona MacTavish.” Wink When you have the time of course.

Writing a scene this AM: JtoC “But mo nighean donn ye canna…” #DiA #Outander S2 But before that, don’t forget April4th — like you would

In the writers room today. Talking @Outlander_Starz … Must admit, I have a pretty cool job :-{)> #jamie #claire #DiA #S2

Sources: All respective Instagram and Twitter accounts, others are linked back in their section if there is one.