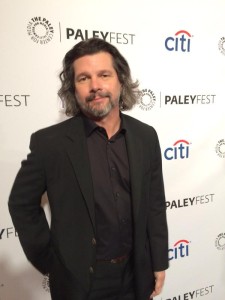 Ronald D. Moore spoke to The Hollywood Reporter about the second half of Season One of Outlander and its darker tone.  He also touches on Season Two.  I absolutely love how proud he is of Caitriona Balfe for her performance, and how protective he is of her.  Below are some excerpts, but please read the whole interview on The Hollywood Reporter.

“What did you get creatively excited about for the second half of the season?

I really liked where it was going, the fact that it was leaving a lot of story behind. One of the things that I was always attracted to in the series overall is that it’s a traveling story — it keeps moving. It doesn’t stay at Castle Leoch. When we were first premiering, and she arrives at the castle at the end of Episode One, I know a big chunk of the audience thinks, “Oh, that’s the home. She’s going to be in that castle, and it’s going to be the story of her and all those people.” And I like the fact that no, it’s not that. It’s just going to keep traveling and going. The second half of the season just keeps moving, and by the end, we’re leaving Scotland behind. We’re going to France. It makes the production incredibly complicated because you don’t have those home base standing sets that you’re always going to back, so you are like reinventing the show at every block. Like, “OK — this block has a completely different set of problems than the last one did.” So it’s a huge logistical problem, but creatively, it’s great. You’re constantly bringing in new characters, leaving old ones behind, starting new stories. There’s a sense of progress, which is really nice.

Do you think that when you reach some of the darker corners, the audience will find themselves tested by them because they’re very enraptured by the romance element?

It’s hard to say. The last couple episodes are tough and challenging [and] you’re really invested in who they are and when these horrific events happen, I think you are challenged by it. In editing and talking to the director, I always want to figure out where the line was: Where’s the point where I can’t watch anymore? What’s the point where I feel like you’re just screwing with me, and you’re just being gratuitous and putting this in my face because you can? And where is the place where you’re shying away from it, and you’re afraid of it? I’m trying to navigate between those two poles was the challenge of it. You wanted it to be truthful to what this was and to not look away, but not to just like shove the audience’s face in it, if that makes any sense. And I think we have accomplished that, but you won’t know until you show it to people.

You sometimes put your characters and crew through the ringer. Have you ever had momentary twinges when you’re watching them performing something particularly grueling?

All the time. I was always very aware of the fact that Cait was in every scene, every day, for a long time. And a big chunk of the time she was wearing that thin, white dress, out in the middle of the night, on location in Scotland, and it was freezing cold. She was a trooper. All the way through the season, I kept trying to give her breaks when we could and try to make sure she was taken care of, but it was hard. I’ve never done a show [and] people just don’t do a show first-person narrative like this, where you’re telling the story from that character’s point of view so they have to be in every scene. It’s grueling. She worked harder than any of us, and she always had a great attitude, and she was always cracking jokes with the crew. And it was really inspiring to watch her do it. But I was always concerned: I was always worried that I was going to get the call she’s got pneumonia or she’s broken down or she just can’t do it anymore. But she always answered the bell. So whenever any other actor or anybody else complained, I’d always be like, “You have no f—ing right to complain! Shut up! Go look at her!””