With the release of a few new Outlander related items since the show’s debut (DVDs, totes, apparel), fans have slowly been building their collections beyond their well worn copies of Diana Gabaldon’s novels. Now that the tv series has found its own share of success, more and more Outlander related items will be available to purchase over the next several months. Below is a list of books, music, calendars, etc that are now available for pre-order. Links to the item’s Amazon and/or Barnes and Noble page are included, along with any available images. This post will be updated as more information becomes available and please remember release dates are subject to change. For now, have fun perusing some of the latest Outlander offerings. 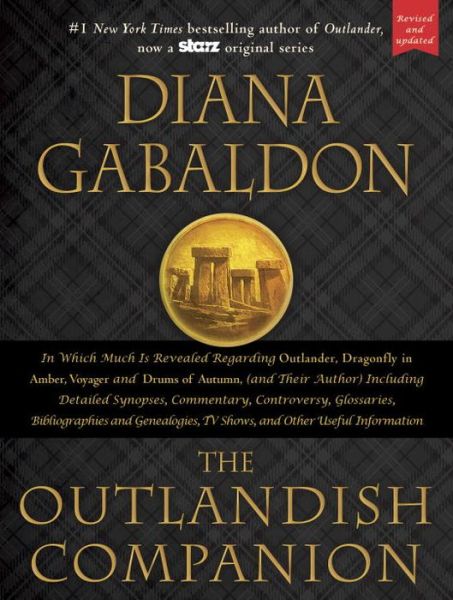 #1 New York Times bestselling author Diana Gabaldon has captivated millions of readers with her critically acclaimed Outlander novels, the inspiration for the Starz original series. From the moment Claire Randall stepped through a standing stone circle and was thrown back in time to the year 1743—and into a world that threatens life, limb, loyalty, heart, soul, and everything else Claire has—readers have been hungry to know everything about this world and its inhabitants, particularly a Scottish soldier named Jamie Fraser.

In this beautifully illustrated compendium of all things Outlandish, Gabaldon covers the first four novels of the main series, including:

• full synopses of Outlander, Dragonfly in Amber, Voyager, and Drums of Autumn
• a complete listing of the characters (fictional and historical) in the first four novels in the series, as well as family trees and genealogical notes
• a comprehensive glossary and pronunciation guide to Gaelic terms and usage
• The Gabaldon Theory of Time Travel, explained
• frequently asked questions to the author and her (sometimes surprising) answers
• an annotated bibliography
• essays about medicine and magic in the eighteenth century, researching historical fiction, creating characters, and more
• professionally cast horoscopes for Jamie and Claire
• the making of the TV series: how we got there from here, and what happened next (including “My Brief Career as a TV Actor”)
• behind-the-scenes photos from the Outlander TV series set

For anyone who wants to spend more time with the Outlander characters and the world they inhabit, Diana Gabaldon here opens a door through the standing stones and offers a guided tour of what lies within. 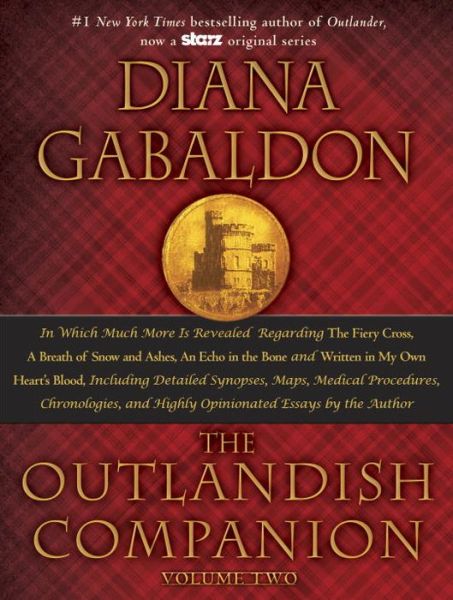 More than a decade ago, #1 New York Times bestselling author Diana Gabaldon delighted her legions of fans with The Outlandish Companion, an indispensable guide to all the Outlander books at the time. But that edition was just a taste of things to come. Since that publication, there have been four more Outlander novels, a side series, assorted novellas, and one smash-hit Starz original television series. Now Gabaldon serves up The Outlandish Companion, Volume Two, an all-new guide to the latest books in the series.

Written with Gabaldon’s signature wit and intelligence, this compendium is bursting with generous commentary and juicy insider details, including

• a complete chronology of the series thus far
• full synopses of A Fiery Cross, A Breath of Snow and Ashes, An Echo in the Bone, and Written in My Own Heart’s Blood
• recaps of the Lord John Grey novels: Lord John and the Private Matter, Lord John and the Brotherhood of the Blade, Lord John and the Hand of Devils, and The Scottish Prisoner
• a who’s who of the cast of Outlander characters, cross-referenced by book
• detailed maps and floor plans
• essays on subjects as wide ranging as Outlandish controversies regarding sex and violence, the unique responsibilities of a writer of historical fiction, and Gabaldon’s writing process
• Claire’s Surgery
• a guided tour of the clothes, food, and music of the eighteenth century
• a Gaelic glossary and pronunciation guide
• personal photos from the author taken on the set of the Starz Outlander series

As entertaining, wide-ranging, and addictive as the series itself, this second volume of The Outlandish Companion is a one (or two)-of-a-kind gift from an incomparable author. 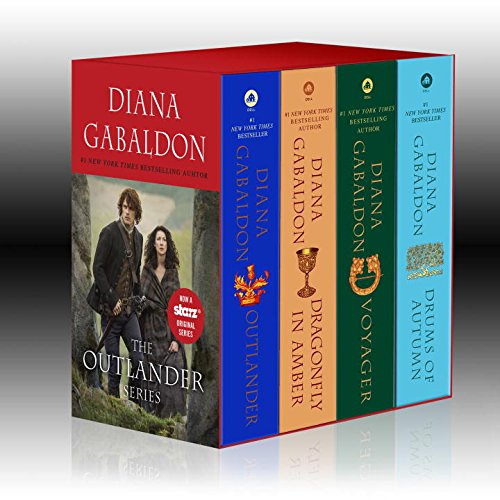 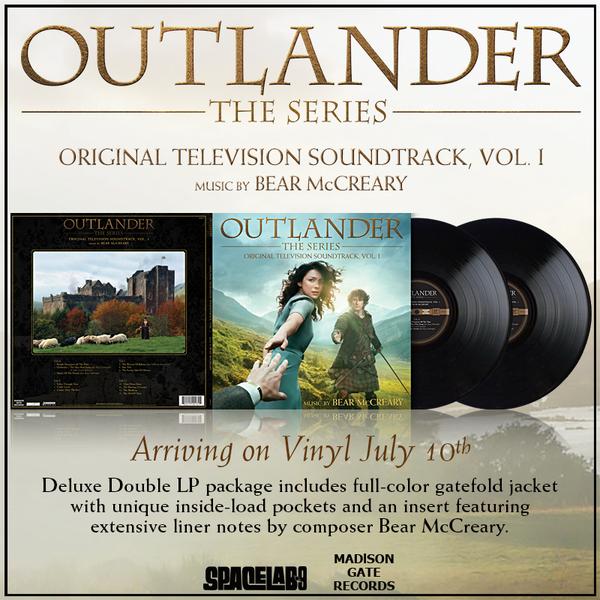 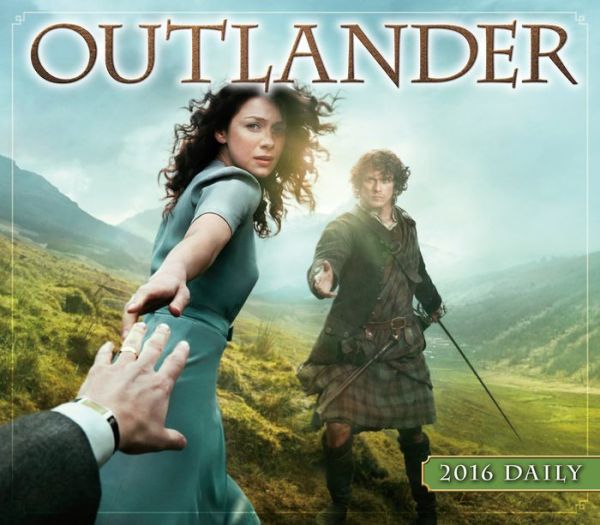 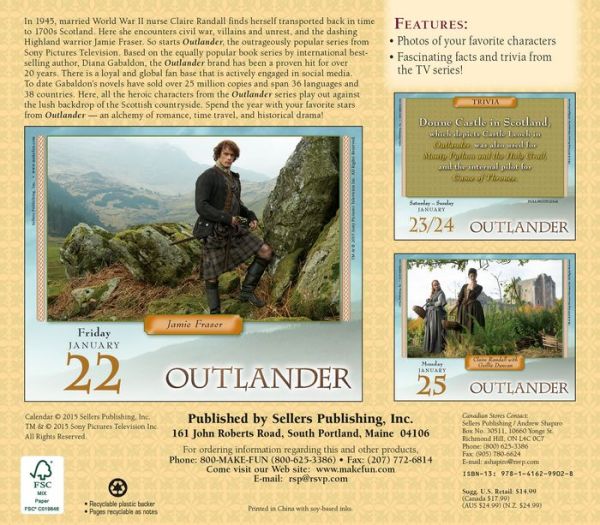 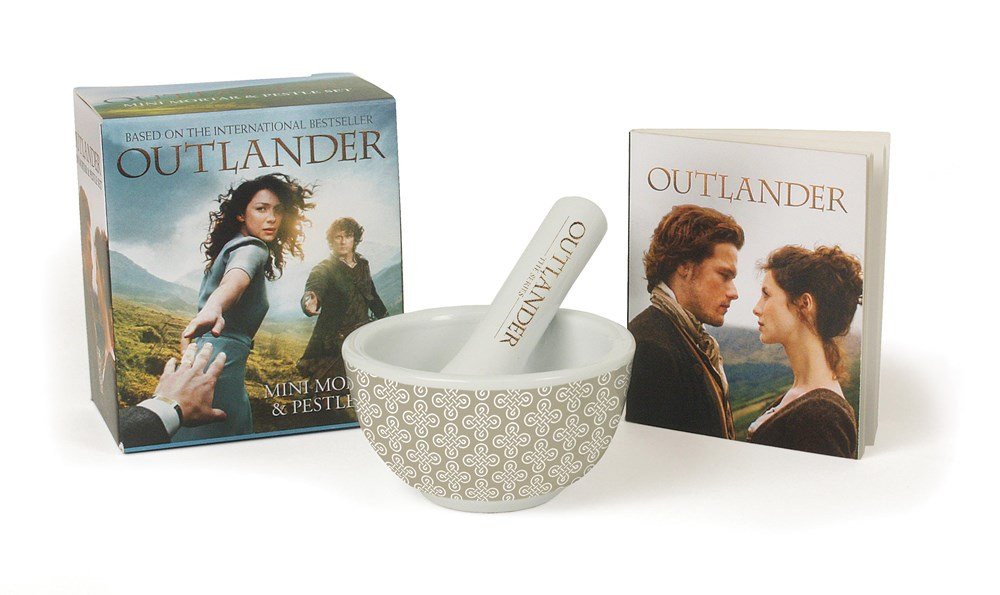 Based off the New York Times bestselling series that has sold more than 25 million copies worldwide in 38 countries, and Starz network TV series Outlander, this fun kit includes a mini-size Outlander-branded mortar and pestle set—just like the one Claire Randall used to help heal the sick—and a 32-page book of quotes and full-color images from the show. 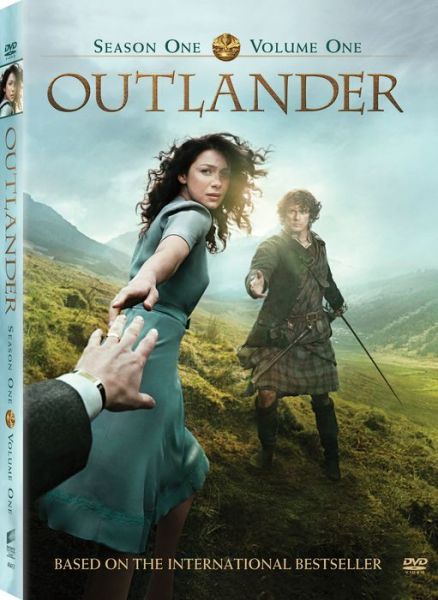 Special features: “An Epic Adaptation” and “The Dresses & Kilts of Outlander” featuettes.

Outlander: Season One – Volume One (Blu-ray)
Barnes and Noble 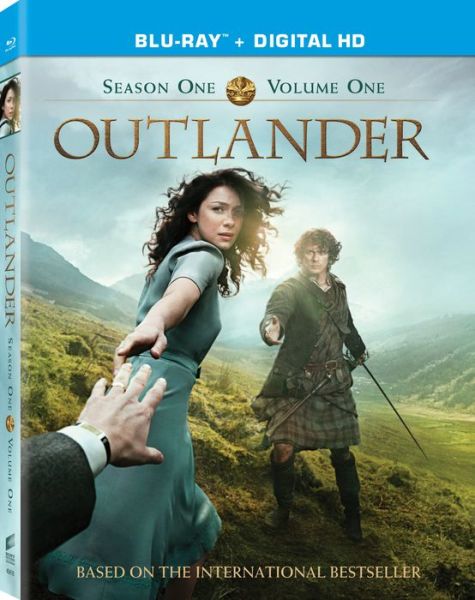 Disc 2: 10 Deleted Scenes, Three featurettes(“On Location: Castle Leoch and the Magic of Scotland”,
“Emerging a Scot: Cast Goes to Bootcamp”, “Walk Through the Sets and Stages with Ronald D. Moore”) 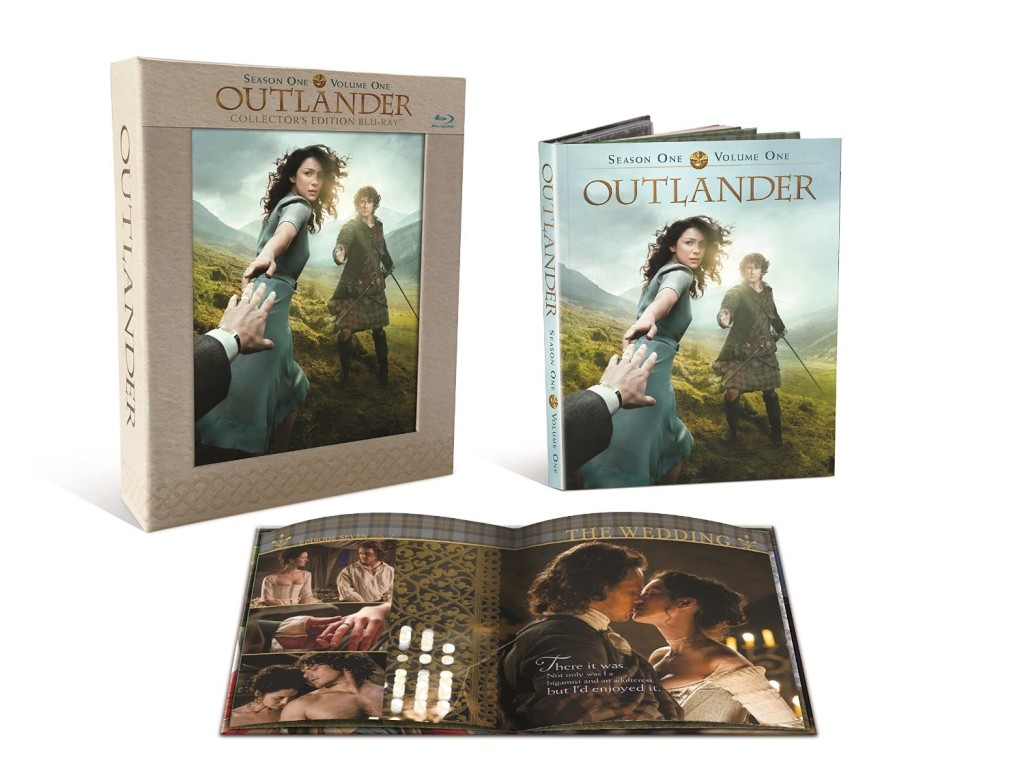 Disc 2: 10 Deleted Scenes, Three featurettes(“On Location: Castle Leoch and the Magic of Scotland”,
“Emerging a Scot: Cast Goes to Bootcamp”, “Walk Through the Sets and Stages with Ronald D. Moore”)

Collector’s Edition Blu-ray set also includes: a collectible lenticular, 32-page book with photographs, excerpts from the scripts, and an introduction from Diana Gabaldon, and placeholder for Volume 2. 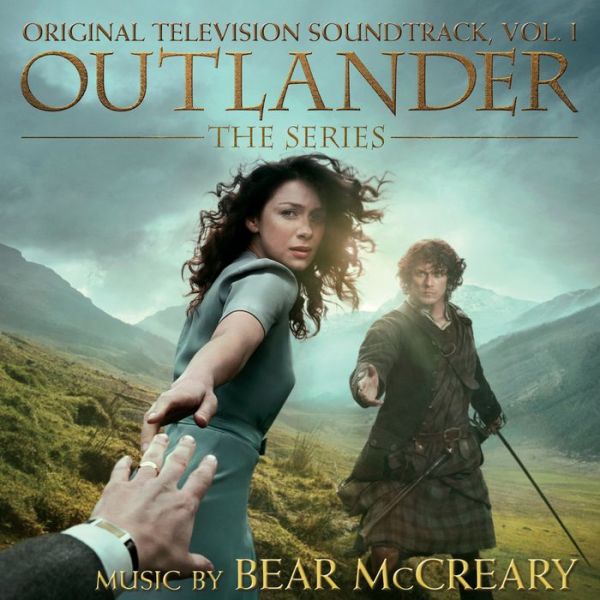 The official Outlander store also has a variety of items available, including jewelry replicas, apparel, totes, and more. Check out the store’s entire collection here.