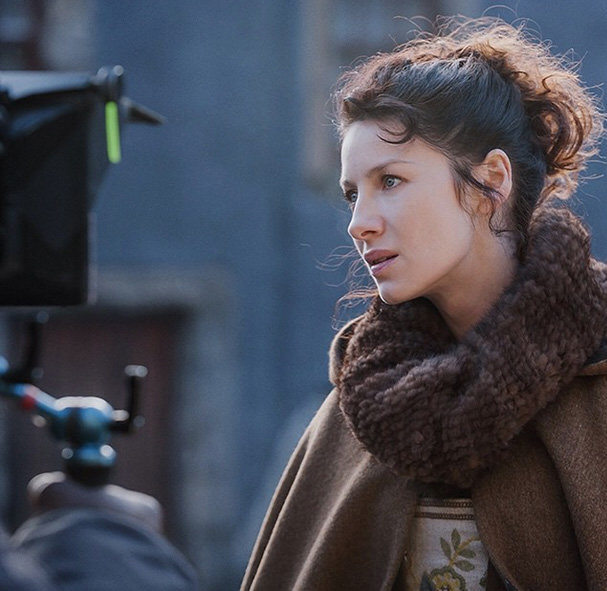 Yes, Ms. Balfe believes she has had an encounter with a ghost, but more on that in a moment. John Day from ‘The Globe and Mail’ had an opportunity to participate in a call-in interview with Caitriona Balfe (Claire Randall/Fraser) in regards to her character and playing the part. She, of course, described Claire as “passionate, intelligent, and fearless”, a “wild horse.” I think she pretty much nailed that on the head! Wild is right, but that’s one of the many reasons we love the character.

Two bits that I found particularly interesting were where she hesitates to say that a woman can be in love with two men, and addressing the romantic scenes in the first half of the season. The hesitation intrigued me because I hadn’t questioned Claire’s continued love for Frank, despite everything happening with Jamie. Apparently, though, Caitriona sees her more as conflicted, than in love with both of them; that her love for Frank is now being challenged in a way it never really has been before. What I liked, then, about her comments regarding the romantic scenes was that there is no desire to have sex scenes for their own sake in this show, a desire reflected in the producer and showrunner, Ron Moore, as well. What was even better is that the fans seem to have enjoyed the realism and honesty of these scenes. It’s refreshing.

The other part of this interview that caught my interest was her anecdote about meeting a ghost during a stay in Japan one time:

Given that Outlander is sparked by a mystical event in which Claire is transported to the 18th century, Balfe was asked, “Ever had a mystical event in your life?” She hesitated, then said, “Well, what do I share here … ?” And then she told the story of working in Japan a few years ago. “I think I met a ghost. People like to ridicule that, but I think it happened. There were noises in this house. I would come home and find electrical things were turned on. In bed one night I felt a presence in the room. I felt something stroking my head. The next day I packed my bags, and never stayed there again.”

Creepy! I don’t blame her for taking off! Nope, not one bit.

Source: The Globe and Mail

Also on the Claire scene, Barb Oates from ‘Channel Guide Magazine’ interviewed Caitriona on other topics of interest more focused on the second half of the season, though of course there were the questions about Sam and the fans first. What I thought was nice was to hear about how she’s going to be learning French in preparation for the Second Season of the show which, if you did not know, starts filming next month, as well. She is very excited to be back with all her costars and to start filming the next part of this wonderful saga.