This week’s behind the scenes post begins as usual with Outlander’s Instagram photos.  There has only been one photo released in the past week and it features Caitriona Balfe (Claire) and Sam Heughan (Jamie) embracing on set. 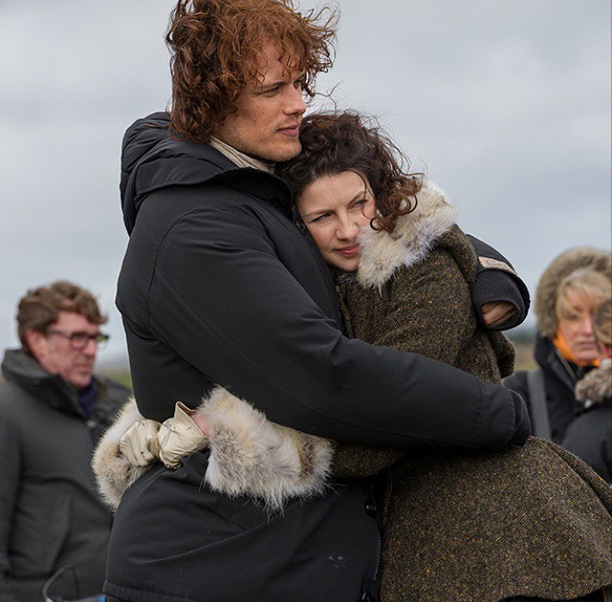 #outlander Scottish Language Glossary Putting the finishing touches to the first draft of my Gaelic and Scots… http://t.co/qtLTC82C52

@Outlander_Starz Relaxing in the heather…..and why Highlanders invented camouflage… pic.twitter.com/YQiXh6Qz7h

@OneGoodCatholic @Outlander_Starz "The Wedding" is essentially the "Claire and Jamie theme." 😉

@OneGoodCatholic @Outlander_Starz don't worry. While there's no track with that name, their theme is featured prominently on a ton of tracks

One of my favorites #potd from S1. It totally embodies Scotland @Outlander_Starz #outlander #flashbackphoto pic.twitter.com/mI9Y9dIskd

Prepping for a shot #bts I'm there just behind the camera ;-{)> @Outlander_Starz Saturdays are #outlanderdays pic.twitter.com/i0nsdehJaY

@FManor75 Oh, my department is all back in, except for set team. We have only stopped for three weeks in October. Straight through…

@echointhebone @Violhaine2_0 No, he can't. Nor should he. I have never had as much freedom on a show as I have on Outlander. It is wonderful

@brigitte_jean 6 bodices 4 skirts. and then a couple of party frocks. That's all she had. Completely reasonable.

@WalkerMrsetw They belong to Sony. They keep them.