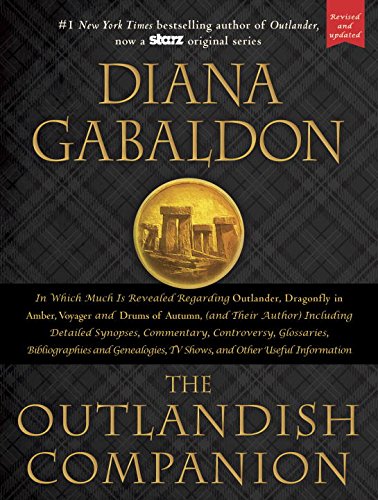 Today, it hit the internet that an updated version of the original Outlandish Companion by Diana Gabladon will hit bookshelves on March 31, 2015.  This book is basically a companion to Outlander, Dragonfly in Amber, Voyager, and Drums of Autumn.  This new version (“updated and revised”) features new content.

According to Diana Gabaldon, here is what has changed:

I removed a few chunks of obsolete material and replaced them with new material, including a couple of essays and a section on “Book to Film: How we Got from There to Here” (including hitherto-unreleased photos from the Starz TV show, and “A Brief Account of My Career as a TV Actor”).

This book still includes detailed synopses of the first four books of the series, an annotated Cast of Characters, Essays on: Where Characters Come From, Doing Historical Research, Botanical Medicine, Where Titles Come From and The Gabaldon Theory of Time Travel, a Gaelic Glossary, Roger Wakefield’s Genealogy, Jamie and Claire’s annotated Horoscopes, FAQs and Controversies, an Annotated Bibliography of aaaaaalllll the books I used as research for the first four novels, and a lot of other stuff I felt like putting in.

This is not the additional Outlandish Companion that she has been working on to be the companion to the rest of the Outlander novels.  Diana believes it will be out Fall 2015.

You can preorder the updated Outlandish Companion on Amazon.

Source: Amazon, Diana Gabaldon on Facebook, and Outlander Spanish for the heads up.