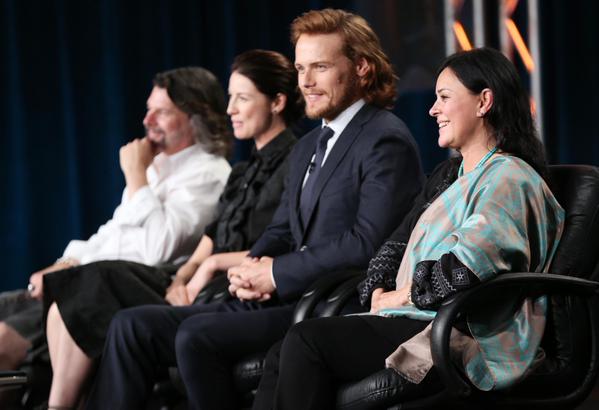 *There are spoilers in the post for those who have not read all of Outlander or Dragonfly in Amber.*

The panels at the winter 2015 Television Critics Association press tour are not open to the public and are not filmed.  So far, we have seen photos and tweets about what was said in the panel.  TV Tango published a full transcript of the panel for Outlander fans.  They did the same thing last year.  Below are excerpts from the transcript, but please head over to TV Tango to read the entire transcript.

Ron (about book to script to screen): We sort of have the philosophy that we don’t make changes unless we have to.  And then, if we do, we sort of always strive to get back to where the book was and sort of get back on the path.  So you always have sort of a guide of what you’re trying to accomplish, and we sort of have an integrity to what the series is at this point.  We’ve changed certain things.  We’ve made certain adjustments.  And so you sort of are honor bound to maintain the consistency of that going forward, especially for the audience that has never read the books, so they’re just watching the show.  So you’re always trying to sort of keep an eye on the book and keep an eye on what you’ve established in terms of continuity and mythology and just keep moving forward.

Question: Are you finding that Book One fit the 16 hours perfectly?

Ronald D. Moore: No.  Sixteen was a good number for the first book.  We did the entire book in the course of the first season.  Along the way, you would look at individual episodes again and you would sort of decide, in this moment do we want to expand this sequence?  Do we want to contract it?  Are we short handing certain things?  It’s sort of a case by case basis.  Episode 6, we made an entire episode out of a very small chapter of a book.  And in other places, we’re condensing many different events into a single episode.  So it’s all sort of in the moment of how you’re deciding to tell the story.  But we did manage to do the entire first book in the first season.

Question: In the beginning of the first episode of this second half of the season, we switch from Claire’s voiceover to Jamie’s voiceover.  Is that something we’re going to be seeing throughout this season or is it just particularly for this episode?

Ronald D. Moore: It was just for this episode.  We did that for a couple different reasons.  You know, as we got into the season and we knew there was midseason break, so we had this great cliff hanger.  And then, as we were developing Episode 9, we said, “Well, all right, don’t want to really pick up in real time just on the cliff hanger.”  We’re also restarting for the audience, so let’s have a lead in to the episode and sort of start the show again.  And it was an opportunity to then shift point of view.  So it was interesting to tell those events in that first hour from Jamie’s point of view.  And then, it also served a larger goal in the life of the series in that the show beyond Season 1 is really about Jamie and Claire together, and this was a moment to sort of pivot to now include him in the perspective for the audience, and that gave us permission moving forward to then do scenes that Jamie was in, that Claire wasn’t in, so now the show became about both of them as we move forward.

Question: Has the series brought you more readers? You didn’t have any problems with that before, but has it brought you even more.

Diana Gabaldon: Well, it has. And what’s most gratifying, meaning no disrespect whatever to the hordes of female readers whom I value immensely, but the TV show has brought me a lot more male readers. Evidently about 47 percent of our viewers are male. And while I’ve always had male readers, they tend not to join book clubs, so they’re not nearly so visible. And now they’re kind of coming out of the woodwork.

Question: Is there any plan to change location for the second book, which takes place in Paris, or are you going to make Scotland look a little bit more Parisian?

Ronald D. Moore: We’ll continue to shoot in Scotland. The second book is sort of divided into two pieces. There’s a section in Paris and then it returns to Scotland for the second half. We’ll build interiors at our facility in Cumbernauld where we do all of our stage work. We’ll also do some location work in Scotland. And then, for exterior Paris streets and stuff like that, we’re starting the process of looking around and seeing where else we can shoot that kind of material. And then, it’s Scotland for the entire second half of the season.

Question: Ron, in the midseason finale we got to see Frank’s perspective, which wasn’t a part of the book. Are we seeing Frank anymore, or is that part kind of in the past now?

Ronald D. Moore: It won’t be for the rest of the first season. The story does revisit Frank in the 20th century in Book Two. And so in the second season, you will.