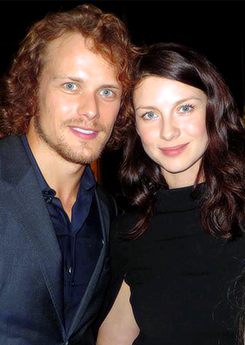 Last night, Sam Heughan and Caitriona Balfe attended a Golden Globe party that announced Miss Golden Globe 2015.  While there, they spoke to PopSugar about the series.  Here are some excerpts, but please read the whole post.

Caitriona: “Any changes involved have been amazing. We shot right up until about a month ago, so I was still in Scotland, where you left me, up until the end of September. Probably in the same clothes! But it’s just been really nice since we’ve come back. Obviously a show like this opens more doors and creates more opportunities, which is amazing, but other than that, I still hang out with my friends and do my thing.”

Caitriona on the long break between episodes: “I don’t know why they did that to them,” Caitriona joked. “It was very mean!” Still, she hinted that waiting can be the best part. “A lot of shows are doing [split seasons] now, and it also gave us a chance to finish filming, because that was also a big thing,” she explained. “It’s great. Now [fans] have something really fun to look forward to.”

Toughest scene in the second half: The pair were required to row a rowboat together and found they didn’t have a particular talent for it. “The boat was tough,” Sam said. “We’re not very good at rowing.” Caitriona clarified: “Sam’s a terrible rower.”

Source: PopSugar, Photo from Sexier than Braveheart Tumblr (credit to original source not given)